Warning to the reader

This is my first time doing kernel exploit development - so the following probably contains some errors which I apologise in advance for.

The bug is a Use After Free (UAF) in the Near-Field-Communication (NFC) subsystem of the Linux kernel (before v5.12.4). However, for this demonstration we will exploit it on v5.15, with the patch reversed.

Let $S_i$ be a socket constructed with:

Then suppose we bind $S_i$ to an address $A$. $S_i$ will be loaded with a pointer to an object $L$ of type: nfc_llcp_local. However, if the bind fails for $S_i$ then $L$ will be freed while $S_i \to L$ remains defined. So a future computation which dereferences $S_i \to L$ will transition the kernel into a weird state.

The patch removes the pointer $S_i \to L$ when $L$ is freed on bind failure. Further information on the bug

The io_uring mechanism implements asynchronous I/O. Upon setting up an io_uring instance we get two related ring buffers: one for submissions and one for completions. Each submission is a request to the kernel to carry out an I/O operation. The completions are objects which return the status and data from an I/O request. We retrieve an object from the submission queue entries array, initialise it with an opcode and related data, and then issue the system call io_uring_enter to submit.

We can also setup the io_uring instance with the flag IORING_SETUP_SQPOLL which enables an internal kernel thread to poll the submission queue for new submissions. This reduces system call overhead by ensuring there is always a kernel thread waiting to carry out requests. We will take advantage of this as this kernel thread loads its credentials from an object in the kernel heap. LWN article

A system call which enables a user to create a file descriptor for implementing on-demand paging in userspace. We use this system call extensively to manage the kernel heap by handling protection faults generated while in copy_from_user and copy_to_user. manpage

Usually, the memory management unit issues a page fault when a thread attempts to access a virtual memory address which is not yet associated with a physical frame. In this case, the kernel may resolve the fault by creating a new page table entry for the specified page. However, in this more general context we refer also to general protection faults induced by attempts to access memory which is protected in certain ways i.e. writing to read-only memory. This is because userfaultfd can be configured to handle “missing page” faults as well as protection faults.

The strategy is to leak and overwrite an object $R$ of type io_ring_ctx. By doing this, we can control the sq_creds field of $R$. Note that $R$’s type is chosen because objects of $R$’s and $L$’s types are similarly issued from kmalloc-2k.

$R \to$ sq_creds replaces the current credentials of the submission queue poller (SQP) thread when it performs an io_uring request. If sq_creds points to a struct cred object $C$ such that $C$ has uid, gid, and so on set to $0$, then the SQP thread will perform I/O requests as if the invoking user were root.

We can therefore read or write files on disk as an unprivileged user by issuing requests to the io_uring instance (managed by our controlled $R$). The demonstration here just reads out /etc/shadow. But to attain root privileges, simply edit /etc/passwd to enter a root shell.

We use the following components and techniques:

With three NFC sockets, we are able to free $L$ three times. However, after each free, we need to overwrite some portion of $L$, which we call the local header, to ensure that the subsequent free will not cause a crash. Specifically, we write to set the refcount to $1$ so that the next free will not set the refcount to $-1$, raising a warning or crashing the process. Additionally, we ensure the first list_head field of $L$ is well defined.

The setxattr technique is well known. It allows the user to allocate a kvalue object whose size and contents the user determines. It allows us to write from the beginning of the kernel object. However, after we finish writing to kvalue from userspace, kvalue is freed.

We use userfaultfd to pause a thread while in the kernel context via setxattr. This technique is documented here. We use two variants of the technique. One issues a page fault when reading at a userspace address. The other issues a page fault when writing at a userspace address. These correspond to copy_from_user and copy_to_user, respectively. The former is associated with setxattr and the latter with msgrcv.

Finally, a note on conventions. In the next section “unblocking thread $X$” usually means handling the page fault caused by thread $X$ while in the kernel context. A thread cannot handle its own page fault, but delegates this to a thread further up in the hierarchy. Though, not necessarily the next one up i.e. thread $Z$ unblocks thread main and thread $Y$ while thread $Y$ unblocks thread $X$.

If we are dealing with a setxattr page fault, then to “handle the page fault” means we provide a new buffer to the userfaultfd subsystem with an ioctl. This then allows the write to kvalue ($L$) to continue, afterwards freeing kvalue ($L$). Similarly, with the msgrcv page fault we unprotect the buffer and continue reading. The reader is advised to look over Vitaly Nikolenko’s explanation linked above. This will explain what we mean when we say “page fault at a certain offset” in the next section.

First, we close $S_1$, freeing $L$. We then allocate $7$ msgsnd buffers which discard additional allocations. Now that $L$ is free, we can reallocate it using setxattr. The value which we pass to setxattr is memory protected such that reading at a certain offset will result in a page fault. With userfaultfd we register the corresponding range so that thread $X$ can catch the page fault. The offset is the size of our own defined header for $L$’s type. We need to overwrite the header of $L$ so that freeing it again (when we close $S_2$) will not result in an early crash. This header just includes a list_head and a refcount field, whose counter value we set to $1$.

Third, from thread $Y$, we catch the previous page fault issued in setxattr as performed by $X$. However, this time after we close $S_3$, freeing $L$ for the third time, we allocate $L$ again through msgsnd. We then create a write protected buffer and register it with userfaultfd, our userspace receiver msg_msg sits at a negative offset from the write protected buffer. We pass the address of our msg_msg object to msgrcv. When msgrcv, specifically store_msg, writes to an offset from msg_msg, another page fault will be issued. This offset is determined by the size of the struct msg_msg header.

At this point, main is paused to hold $L$ in place. We later unblock main by handling the page fault issued from setxattr in main - this will free $L$ to be reallocated as $R$. Additionally, $Y$ is paused to hold $L$ in place. $Y$’s continuation would leak the data in $L$ (at that point, $R$) to userspace, and then $Y$ would continue thread $X$ by resolving the setxattr page fault issued from $X$. Finally, $X$ is paused and will continue writing to $L$ ($R$) when $Y$ resolves $X$’s page fault.

Fourth, from thread $Z$, we catch the page fault issued in msgrcv as performed by $Y$.
Now $X$ unblocks main by handling its page fault. This continues the setxattr write over $L$ and subsequently frees $L$ for the fourth time. We then allocate an io_ring_ctx object through the io_uring_setup system call and so $L \equiv R$. Finally, $Z$ attempts to acquire a lock which, if successful, would lead it to create a new thread $T$ allocating $R$ again with setxattr. However, at this point, thread $Y$ holds the lock and so $Z$ is paused attempting to acquire it.

The three major phases of this exploit begin here.

Fifth, $Z$ unblocks thread $Y$ by handling the write protected page fault. This first copies out $R$ to userspace. But by doing this, it also frees $R$. So, we relinquish the above lock ensuring that $Z$ continues. When $Z$ continues, it uses setxattr with a value which when read results in a page fault at the first byte. Thread $T$ catches this page fault and doesn’t handle it. So, $R$ is not available to another thread for reallocation and potential corruption.

After we have $R$’s data, we locate the current $R \to$ sq_creds in our userspace buffer at offset $78$ (with scale factor sizeof(uint64)). After reading the leaked sq_creds, we subtract $176$ from it. The intention is to make $R \to$ sq_creds point “behind” the current struct cred object. We then write the new value back into our userspace buffer. Finally, we unblock thread $X$ by handling the page fault issued from setxattr. This writes our userspace buffer to $R$, maintaining all fields except sq_creds which we have manipulated. But by doing this, we also free $R$. So we use setxattr again and catch the page fault in $H$, in the same way as in $T$.

With the end resulting being: 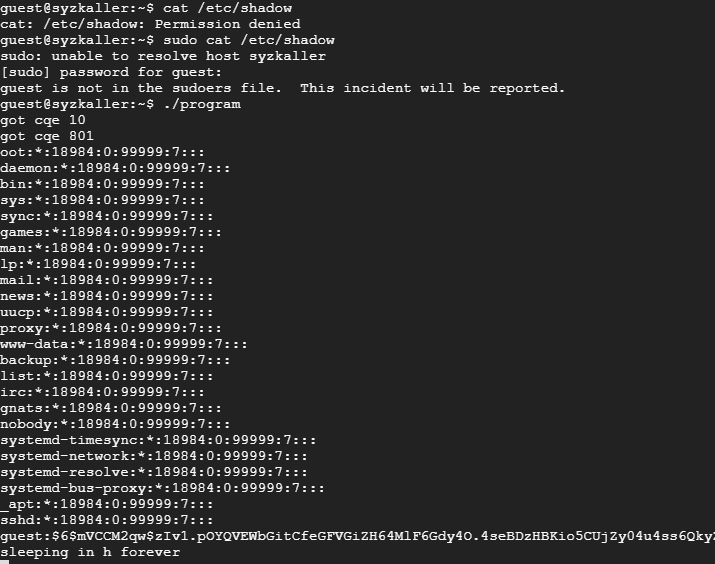 The full code is here